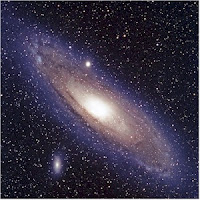 
The Force flows through him and around him as though he has stepped into a crystal-pure waterfall lost in the green coils of a forgotten rain forest; when he opens himself to that sparkling stream it flows into him and through him and out again without the slightest interference from his conscious will. The part of him that calls itself Obi-Wan Kenobi
is no more than a ripple, an eddy in the pool into which he endlessly pours.
The passage goes on to describe how he shares a fundamental identity with the ship he is on, the lightsaber taken from him, the battle droids surrounding him, and even the cyborg general who wants to kill him. All of this is caught up in the inexorable flow that is the Force, a flow that is beyond questions and answers, belief and doubt.
The Force simply is, as constant as the silent stars shining throughout the galaxy. Its luminous reality pours from all the worlds, only to flow back to guide, inform, and connect them. This cross-pollinating energy plays the star systems like a harp, the resulting rhythms being the saga we all know and love ... [8]

[1] Albeit it as a Force ghost. Yes, we really need that deleted scene that tells us all this at the end of Episode III.
[2] This historical debate naturally continues in all six Star Wars films to great effect.
[3] Such as levitating an X-Wing.
[4] Or at least I do, but I’m weird like that.
[5] This biological root makes the dreaded midichlorians totally sensible, though lucky you, we won’t tackle that until a later date.
[6] The Force.
[7] Like say, a certain Senator from Naboo.
[8] Interestingly, I rediscovered a quote from Percy Shelley who once conjured up an image that he intuitively sensed when he let go his conscious self and was inspired to write poetry: “There is a power by which we are surrounded, like the atmosphere in which some motionless lyre is suspended, which visits with its breath our silent chords, at will.” Our very own Romantic poet could have been channeling the Living Force, no?
Posted by Paul F. McDonald at 7:56 PM 2 comments: