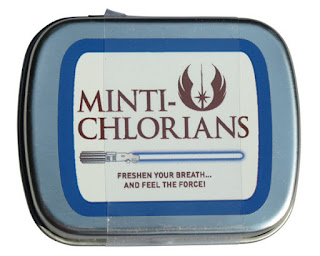 So I was listening to the ModernScholar series. It's a really good idea, this lecture series where the top professors in their field pontificate on any number of subjects. I have found, however, that the execution is somewhat lacking. For instance, one professor, while outlining the basics of a work of literature, used the verb tense "hung" when he should have used "hanged." Worse still, he also attributed a quote to Percy Shelley which actually dripped from the pen of William Blake.

But even worse yet, I made a plunge into the study of sciencefiction. I thought it might have some interesting things to say about Dune, which was the main topic on one of the discs. Well, quite naturally, the professor mentioned Star Wars in the introduction. After rightly arguing that it wasn't hard science fiction, he began to make erroneous comments. The one that really sticks in my mind is that a lightsaber was simply a tool in that galaxy far, far away, something as common as a lawnmower. Whatever. There were also a couple of other observations which fell flat.

Of course, the professor couldn't stop there. He remarked on the use of science in science fiction, particularly citing midichlorians as George Lucas' attempt to ruin his own franchise by turning the Force into some kind of blood disease or some such. I've blocked the main quote from memory. So yes, this guy is allegedly one of the top minds in his field, and this is what he has to say about the Wars.
Not that this isn't common. The confusion that has erupted across fandom from the inclusion of midichlorians in The Phantom Menace is still being felt today, outraging everyone from this professor to Simon Pegg. The Force was ruined, they said. No longer was it a nice, mystical energy field created all things, but pointless, biological, microscopic organisms in the blood. How in the living hell anyone came to this conclusion is beyond me. How anyone, even his most vocal, hateful opponents, could literally believe George Lucas could be so achingly stupid is hard to believe, though that is the prevailing sentiment.

At Celebration VI, apparently Seth Green and the other creators of Star Wars Detours were joking with George Lucas about the hated midis. And that was when Lucas apparently launched into a brilliant, half hour long philosophical of explanation of them. Word on the street has it that everyone present came out of it loving midichlorians.

This only makes sense. After all, they've been part of Lucas' notes on the saga since the seventies. And since it's been canon since the original trilogy that Force ability is in fact passed down through bloodlines, the notion that there is - horror of horrors - an actual biological connection lines up perfectly. But so many people wandered out of the theaters utterly dumbfounded in '99.

Tell you what I'm going to do. I'm going to post a few pages from my upcoming book that center around, clarify, and explore these little microscopic buggers. And I'll just hope against hope that this helps quell the haters a bit. This from Chapter Two: The Symbiosis -

So the theme of symbiosis has been briefly examined on a galactic, planetary, cultural, and character level, but it goes deeper still.

In Ethics, the Dalai Lama states that when the lens of symbiosis is taken up, “We begin to see that the universe we inhabit can be understood in terms of a living organism where each cell works in balanced cooperation with every other cell to sustain the whole.” For our purposes here, the Living Force is the organism uniting the galaxy and, yes, as the Dalai Lama himself said, that extends to the cellular level.

To me, this is only so much common sense, yet one of the most hotly contested elements in The Phantom Menace was the inclusion of midichlorians, the tiny, microscopic organisms that allow Jedi to commune with the Force. Of course, there seems to be an extraordinary amount of confusion regarding what midichlorians even are. Inexplicably, many walked out of the theater believing that the Force was no longer a mystical energy field created by all living things, but some sort of weird blood disease. Never mind that this was never stated, discussed, or even alluded to in the film or the script.

Aside from portraying the maverick Jedi master Qui-Gon Jinn, Liam Neeson seemed to have little trouble with the concept, though he did ask his director about them. “He said that we all have thousands of bacteria in our systems – suppose a particular strain had a life force that was connected to the universe? And what if some people had a stronger strain of these bacteria than others did?” Neeson recounted, adding, “I thought the idea was both fascinating and believable."

In the 2005 Vanity Fair interview, he conveniently launched into nothing short of a soliloquy on them:

It means that between the Force, which is sort of a life force, and reality, the connectors between these two things are what we call [midichlorians]. They’re kind of based on mitochondria, which are a completely different species, a different animal, that live inside every single cell and allow it to live, allow it to reproduce, allow life to exist. They also, in their own way, communicate with the Force itself. The more you have, the more your cells are able to speak intuitively to the Force itself and use the powers of the Force.

Of course, many have vehemently objected to the Force having any connection to the material, biological world at all. As Yoda waxed poetic in The Empire Strikes Back, “Luminous beings are we, not this crude matter.” Unfortunately, our little green master seemed to have momentarily forgotten that the Force is the offspring of the material world. Physical life is the very root of it, the thing that causes it to grow and expand. No biological galaxy means no luminous energy, and this has been part of Star Wars canon since the beginning.
Conveniently, there is a fabulous article in Star Wars and Philosophy that delves into this while discussing environmental ethics. Elizabeth F. Cooke of Creighton University cleverly shoots down the mind-body antagonism some have seen in the saga.
Establishing Yoda’s oft-quoted line as only part of the picture, Cooke writes how the Living Force “isn’t so much the ‘mind-over-matter’ picture as one of mind and matter interacting as two parts of a whole. A Jedi padawan’s task is to become more in touch with the physical world by being more at one with the Force – a task achieved through both physical and mental training. A Jedi must learn to ‘feel’ the Force, rather than just think about it.”
This also fundamentally ties in with the fact that every species with close, harmonious ties to the physical world, like the Gungans, Wookiees, or Ewoks, are invariably shown in a positive light. In their own way, they are as bound up in the life force as the Jedi. As Cooke explains, “They work with nature to defend nature, and nature is one with the Force.”
Contrary to popular understanding, not every spirituality has to be predicated on an eternal war between religion and science, much less spirit and matter. This is a cultural oddity that Lucas is clearly trying to rectify with his inclusion of midichlorians. Like neural pathways in the brain, the midichlorians are conduits, the bridge connecting spirit and flesh to create a greater whole. Clearly there has to be some kind of biological component at work, which is why the Force is inherited, or at least stronger in certain families than others. The only reason anyone knows that the Force spirits is because midichlorians matter.
This interdependence is something science is discovering as well, with scientists increasingly realizing, from astronomy to quantum physics, that no single part is isolated and separate from the whole. In Life of Earth: Portrait of a Beautiful, Middle-Aged, Stressed-Out World, Stanley R. Rice wonderfully illustrates how symbiont circles operate:

Much of the subsequent biography of Earth consists of cells merging together
the processes that they already had, producing complexity from primordially
simple parts. By joining together, each of them benefitted from the other.
They formed partnerships that accomplished things that neither could do
alone. This is symbiosis: the close cooperation, and perhaps even fusion,
of more than one species into a cooperative unit. It is symbiosis that
transformed Earth from a broth of simple cells into everything it is today.

This is a beautiful thing, and it is arguably the central theme of Star Wars.
Again, nothing is changing on any level whatsoever besides the size scale. Some objected to the young Obi-Wan Kenobi using a microscope aboard the Queen’s ship to study midichlorians at all, but they might just as well object to Luke Skywalker studying Tusken Raiders from afar with his macrobinoculars in A New Hope. Whether reality is seen from under a microscope or through a telescope, nothing is changing but the level of magnification.
To object to midichlorians is really to object to Force users themselves, since the former is merely a microscopic view of the latter. Or to put it another way, as the Jedi contact, communicate, and use the Force in the larger body of the galaxy, so midichlorians channel and use the Force in the larger body of the Jedi.
Again, nothing has been altered or rewritten except the size scale.