Square Peggs in Round Holes 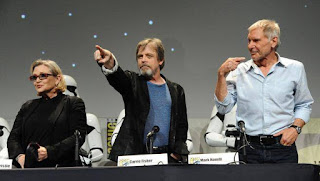 So this post isn't going to be anywhere near as long as it originally was going to be. Like a considerable part of the Internet, I feel like I've already written several volumes on the San Diego Comic Con panel. And as always with Star Wars, passions have run pretty high. Enough to make me have to stop and evaluate and remember what I'm actually in all this for to begin with. Or rather why I'm back.

And it isn't just to spend all day, every day arguing about "CGI" vs. "practical effects."

But I am sympathetic to anyone who feels differently. When someone gets out there praising the production team for - of all things! - actually filming in an actual desert for the new movie, that's a bit much. I mean, sure, we all know the prequels weren't filmed in a real desert, but rather a fake, CGI, air-conditioned one, but come on. 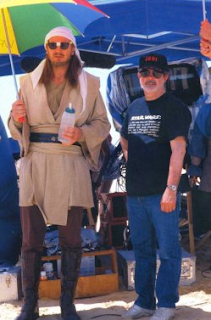 (What you think that's actual sweat?! No. That was all digitally added later. But argh. It really is sooo easy to let go and rip on this stuff.)

Anyway, there has been some great commentary provided on other sites. If you're on Facebook, where much of my own writing has been, you should check out the Star Wars: The Prequel Trilogy page. As always, the Star Wars Prequel Appreciation Society has weighed in with its characteristic style and wit. There is also a phenomenal video on YouTube that deserves your attention, and I'm just not saying this because my book got a shout-out.

In short, I agree with the commentators.I hope there's not another online fan war on the horizon. If so, I may just be a conscience objector this time around.  #1999

Oh, I had a lot to say about the Comic Con stuff. The puns and the zingers were going to be off the hook. But enough of that.

For the record, The Star Wars Heresies does think Kennedy is way too in awe of the fanbase and gives them way too much credit, particularly given their online behavior for the past fifteen years. And J.J. Abrams' relentless advocacy of "practical effects" is way too overstated, whatever his actual feelings on the subject. One of the high points was definitely Lawrence Kasdan's shout-out to George Lucas and his "genius," but overall it was a pretty lackluster panel, nothing compared to the stuff at Star Wars Celebration. Which perhaps is somewhat inevitable when everyone is on a panel to talk about a movie no one is actually allowed to talk about.

(Sorry to pimp Doctor Who on here, but that panel was way more fun and lively. Plus a new trailer.)

And may I just say, if you really want a good time, just put Adam Driver alone on stage, and he can stare at seven thousand fans, and they can stare back, thus surely resulting in the most awkward, uncomfortable sixty minutes of anyone's life.

But come on, I'm sure he's going to be awesome as Kylo Ren. It's a delicate balance, my readers. My own journey to The Force Awakens has been complicated. I have criticisms but I have no urge to let my fandom fall to the dark side of negativity. Plus, it would be so nice just to let go and let the Disney era take care of itself, Jedi-style.

The one thing I feel that is absolutely inexcusable is the inclusion of Simon Pegg in The Force Awakens footage. His crimes against fandom are too numerous to mention, but the main issue is, as Jason Swank of Rebel Force Radio put it, that he keeps being rewarded for bad behavior.

I was enjoying the footage, I really was, but if you follow me on Facebook, you know I was ready to slug him through the screen the first time he popped up on the set, basically wetting himself with glee. Then again, Kyle Newman's wife Jamie King has already openly expressed the desire to punch him in the face, so at least I'm in good company.

So I will offer a very serious challenge to fandom. We all know about the infamous Phantom Edit, where the very fanboys raging about the joys of film preservation deleted footage from Episode I and edited it to their liking. So this is what I want. The Pegg Edit. I basically want Simon Pegg edited out of this otherwise pretty nifty footage.

If possible, put Jar Jar Binks in his place, or possibly an animated midichlorian. That would be awesome.


But in the interest of emphasizing the light side, and wanting to be a positive force in fandom, it was indescribably wonderful to have Mark Hamill, Carrie Fisher, and Harrison Ford on stage at the same time. Particularly Harrison. A few years ago, it looked as though Mustafar would have to freeze over before that guy would ever be on a stage at Comic Con talking about Star Wars. And looking as though he were actually enjoying himself, which so many of us struggle with sometimes. 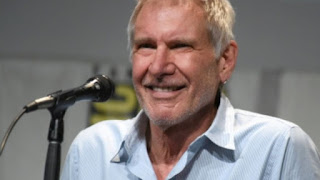 That's about all I have to say on the subject. I could go on and on and on about this, that, and the other, but life is too short. And again, I just don't have time to spend on this stuff day in and day out.

I love Star Wars. I love George Lucas. I still think The Force Awakens will be a fun, entertaining addition to the saga. The new books, comics, and television series have provided some great content thus far. I just wish being a fan wasn't so exhausting sometimes.

May the Force be with You.