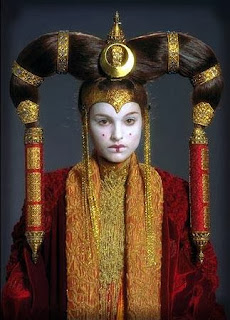 So the second round of review copies are now making their way to a select group of bloggers, podcasters, and websites. The Star Wars Heresies has been charmingly referred to as “heretically dazzling” and “a new beginning for serious Star Wars scholarship” thus far. People are buying and reading and enjoying and that means a great deal to me. More will be posted on reviews in the upcoming months.

For the time being, my modest little promotional campaign continues. As noted, The book itself is divided into three parts, with each section dedicated to Episodes I and II and III respectively. Aside from an overarching theme for each film, chapters are based on a single character, delving into whatever themes, symbols, and philosophies may best be dissected using them as a template. This except is coming to you courtesy of chapter 3, with a singular focus on Queen Amidala in The Phantom Menace -

Long before Princess Leia ever wove her hair into buns and challenged an Empire, her mother sat on the throne of Naboo. The galaxy was “a more civilized age” then, not yet ravaged by civil war nor brutalized by a tyrannical government. Like Amidala herself, the planet she ruled appeared young and beautiful, as though always fresh with morning dew.
Dressed in elaborate gowns and ornate headdresses, the geisha-faced queen cut one of the most instantly iconic images from the prequels. Slipping from one regal outfit to the next, her entire wardrobe was a celebration of beauty and color. But, as with most things in the saga, the look also carries with it whispers and echoes of a mythic past only subconsciously remembered.
When The Phantom Menace begins, Naboo is a world rich and green and bursting with potential, a dream landscape of sweeping grasslands, bright open fields, and vast blue lakes. It boasts a wisdom and an aesthetic, one of the few places in the galaxy where the organic and the mechanical have struck a harmony rather than a tension. All of this speaks of a people in tune with nature and themselves, not to mention in touch with the timeless cycles of life and fertility.
Ruled over by a young queen, the Naboo people reflect back to the matriarchal societies of our own culture, when the female was the primary image of the divine. In World Mythology, Donna Rosenburg writes of this time in our prehistory: "The queen personified the Great Goddess, and she wielded great political, economic, social, and religious power. Other women were considered daughters of the Great Goddess. Thus, all women in the matriarchal society were highly valued, and many of them held important positions." As we shall see by the time of Darth Vader and the patriarchal Empire, the situation will have completely reversed itself.
But at the start of the saga, Naboo shines bright, as does her queen. Her planet itself named after Nabu, the Babylonian god of wisdom, Amidala brings with her shades of the female deities who were once imagined to rule that part of the world. Inanna, the great goddess of Sumeria, was sometimes known as "The Green One," a title also fitting for a ruler of a planet that looks ripe and emerald-green, even from space.
The ornate costumes the shape-shifting Amidala wears likewise evoke the divine feminine, particularly the headdresses and hairstyles worn in her palace as well as in the Senate.
"Some figures of Astarte have two horns emerging from her head," Anne Baring and Jules Cashford wrote, citing another Babylonian deity in their definitive The Myth of the Goddess, "Linking her to Ishtar and to Isis-Hathor in Egypt, for both wore the horned headdress." Indeed, Queen Amidala's image would have looked in no way out of place had it been discovered carved on a bronze seal, or chiseled in a burial chamber, or cast as a marble statue thousands of years ago.
As a fertility goddess incarnate, Amidala would have close ties not only to the people of the land, but to the land itself. As Baring and Cashford explained, "The many different kinds of trees sacred to the goddess ... invoke the courtyards of her temples, where the tree and pillar belonged to her as long ago as Neolithic times." This trend continues in the city of Theed, with courtyards and fountains and pillars and sprawling vines an integral part of Naboo architecture, as well as inexorably tied to the goddess symbolism of the ancient world.
Outside the steps leading up to the Theed palace, twin statues of figures from Naboo mythology tellingly stand. Obviously female, they are sporting long robes as well as spears of some kind. From a distance, they look startlingly like avatars of Athena, maybe the patron goddesses of this capital city. Two similar statues of female deities stand outside the massive hangar complex, perhaps to ensure safe space travel.
While peaceful, Naboo is nonetheless blockaded by the Trade Federation, cutting it off from the larger life of the galaxy. This is the first attack on the values of the queen and the Naboo, an affront to what they truly stand for. In The Dance of the Dissident Daughter, Sue Monk Kidd corroborates this, explaining "Goddess is that which unites, connects, and affirms the interrelatedness of all life, all people." As previously noted, the actions of the hidden Sith and the greedy Neimodians immediately sever this fundamental unity.
Though poised and strong against the Federation aggressors, Amidala nonetheless fails to anticipate a full scale invasion of her planet. The moment the enormous ships land and deploy troop transports and armored assault tanks, the entire ecosystem is disrupted. Animals scurry for cover, foliage is bulldozed out of the way, and ancient trees are felled. The links of connection are broken piece-by-piece until Theed falls to the invading droid armies, and the queen is usurped from her own planet, fleeing to Coruscant to plead with the Republic for help.

I would also like to add that, while it is so cool the quality paperback version on Amazon seems to be selling reasonably well, a much more affordable version is now available thanks to the Kindle –

The Star WarsHeresies: Exploring the Themes, Symbols, and Philosophies of Episodes I, II,and III
Posted by Paul F. McDonald at 5:57 PM 1 comment: