Heading For a Larger World .... 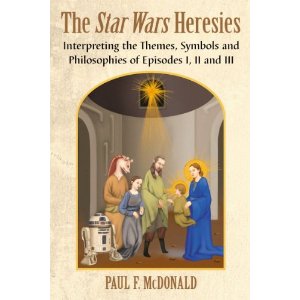 Just a quick update on The Star Wars Heresies, that little book of revolutionary academic criticism that has a bit to say on the themes, symbols, and philosophies of Episodes I-III. Contrary to Amazon, it will not be out this month, but before anyone goes all dark side or starts ripping people’s arms out of their sockets, things are very much underway.


The book is almost finished. The publishers have sent me the proofs and I am getting very acquainted with adobe reader. After having been away from it for so long, it is quite a little thrill to see how much of the text is perfectly intact. I’m still proofing part one, but the editing thus far looks to be brilliant. The tone and style and pretentious verbiage are all very much intact, not to mention even some of my wittier asides in the endnotes.


If only I didn’t have to do the bloody index, the Force would be flowing quite nicely.

Not to mention it’s far too late to update bits of the preface, which is a little out of date thanks to that whole Disney takeover. Part of the afterword will seem a little incongruous now also, but oh well. The content, I have to say, is gonna be great. I just can’t believe I mailed in the book at Kinkos on Saturday back in October, and then Lucasfilm was bought and the world turned upside down three days later. The Force does work in mysterious ways.


While there is not an official release date - Amazon be damned - the final proofs should be going to print about halfway through August. I have a lot of stuff to work through, but as long as my eyes don’t melt from staring at this computer too long, it should be okay. The sad part is I was really and truly going to do a post for this blog today, but then the publishing sandstorm hit, Tatooine-style.


It also seems relevant to note that McFarland and Co. are compiling a list of relevant reviewers and such to fire off copies to, with some input from me. I’m not sure how many copies we’re dealing with here, but if anyone has a blog or website or podcast of note to promote this thing on, feel free to let me know. I will need mailing info shortly.