- The Saga Returns to Theaters - 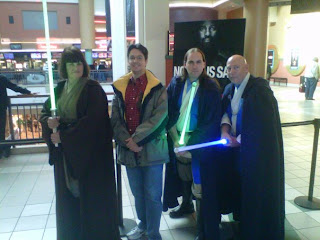 Saturday was a good day to see Episode One: The Phantom Menace once again,  and not only in theaters, but in an added dimension!
Granted, it was extremely cold, especially after balmy temperatures all month. Not to mention the significant other woke-up with a sinus headache, and was understandably reticent about going to see a 3D movie. And, oh yeah, the Mall of Georgia was insanely crowded, with throngs of busy consumers at every turn. I had to park about a mile away, and then face the icy cold wind.
Still, any day you're going to see a Star Wars movie on the big screen is a good day, am I right?
After grabbing lunch in the food court, I wound my way up to the cinema. Happily, a lot of the crowds were buzzing around there, too. Better still, some of them were in costume.
I'd already emailed a friend in the Rebel Legion about any special events around town and, sure enough, various troops were heading out to the local theaters. The 501st were there as well and, hate on Star Wars all you want, but the crowds were totally geeking out. All it takes is a couple of fans in robes and lightsabers, and everyone's five years old again. Young and old, male and female, all were standing around waiting to get their picture taken with a Jedi or stormtrooper. 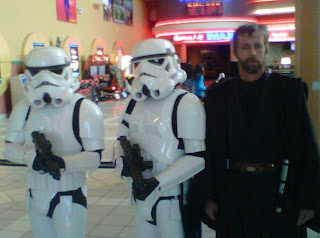 They totally suffused the place with positive vibes in the Force and, as they always do, set the whole thing in the right spirit.
Amazingly, there was actually a line to get in the afternoon showing. And apparently the one before that. My pictures aside, the place was packed. Not sold out, granted, but certainly Episode One was making an impressive debut for the middle of February when the Blu-Ray had only recently come out.
And it was a good line, too. A lot of people had Star Wars t-shirts on over their long-sleeved seasonal wear, and I got into a fascinating discussion with a lady and her husband regarding Hindu and Buddhist themes in the saga. She'd written a lot of papers on the subject, and had apparently taught Star Wars in a comparative religion class. The whole outing was refreshingly hater-free. 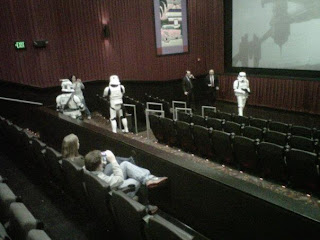 When we got into the theater, all the lights were still on, and stormtroopers were escorting customers to the aisles. There was predictably a lot of "move along, move along" bits. Apparently it worked, because everyone filed to the back and top, with only a few souls bravely choosing the first couple of aisles. I staked out a place midway, my only regret being I hadn't waited for my Rebel Legion peeps to take in a later show. Oh well. I was happy to see the place was at least seventy-to-eighty percent full by the time the movie started. 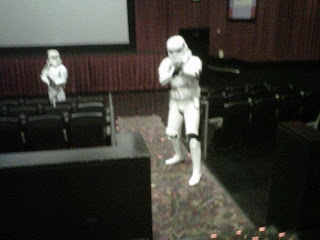 This has been repeated all over the internet, but to see the Lucasfilm logo with the Twentieth Century Fox logo is always a borderline mythic experience. And now it was hovering off the screen! As usual, it took a few minutes to get acclimated to the added dimensions, but the opening crawl was incredibly effective, the letters now floating above the field of space.
As for the movie, I didn't really settle into it until Tatooine, what with so much to soak in and look at. I did develop a slight headache before the podrace, but nothing a quick pain reliever couldn't handle. Still, it never fails. I'm simply incapable of sitting down to a Star Wars movie and not being eventually engrossed in the characters and story. By the time the Battle of Naboo started, I was literally leaning forward, on the edge of my seat.
But we know all of this. As for the 3D, it was really, really well done. It really immersed one in the film while being subtle, at times almost too much so. Not as impressive as Avatar, maybe, but still amazing for a film not made for the format. Inevitably, it did darken the picture and the lines along the edges got a little fuzzy, but Episode One is a very bright, colorful film, so that helped offset it a little.
Effects supervisor John Knoll has gone on record before the release saying a lot of the big, epic scenes and "money-shots" hadn't been altered much, and true enough. The podrace, for instance, seemed pretty contained. There are a couple of first-person shots where one does feel totally right there, hurtling along in the desert at several hundred miles an hour. And it was nice to see the closeup of bounty hunter Aurra Sing. Still, a lot of wide-shots seemed to have been left alone. 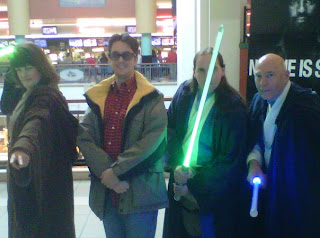 For me, the most effective use of the 3D were the more unexpected bits. For instance, when Jedi or Senators or aliens were just standing around talking, it's almost like the characters are in the theater with you. Anytime Watto was flapping around the screen was great also, as was Jar Jar's swim to Otoh Gunga. Some of the shots around the aerial platforms above Coruscant were likewise stunning, particularly the one at night.
And incidentally, this is the Blu-Ray cut of the film. All the extra DVD bits are there, and of course the great CGI Yoda. He looks fantastic, especially when he appears right in front of the audience after knighting Obi-Wan. Infinitely better than the early puppet.
The scenes that absolutely popped out at me often involved windows. For example, when Queen Amidala looks up at the Trade Federation invading Naboo, yeah, I seriously thought I was about to fall through the windows. Very cool. The same thing happened when gazing out the cockpit window of the Nubian spaceship. A very rich sense of scale and depth.
Perhaps it was just the brilliance of the original scene, but when the doors in the Naboo hangar opened and Maul was just ominously standing there ... that was incredibly awesome. Like doors really were opening up for the audience. And yeah, not to underrate Revenge of the Sith, but this probably was the best duel of any of the films.
Of course, the moment came during the parade in Theed when the movie was almost over. I didn't know if I could elicit any applause from the audience or not. The credits started, and someone in the back started clapping. It would have died out, but I chimed in. And then a couple of others did. It was pretty cool. Maybe twenty or thirty percent of the audience gave a short round of applause. Impressive for a twelve year old film often lauded as the "worst" of the saga, on a bitterly cold weekend in February.
After it was all over, the Rebel Legion guys and gals were already gone. They really want to do a troop at my library, which I'm going to have to arrange. I stopped by Barnes and Noble and bought the Sukhavati DVD I'd borrowed from a friend of mine. It was only appropriate to toast the whole event with a little Joseph Campbell. Especially because Naboo is Sukhavati, but that's another post altogether.
Hope everyone had as good a time as I did. The box office seems to be humming along, so bring on Episode II!
MTFBWY.
Posted by Paul F. McDonald at 10:18 PM 5 comments: 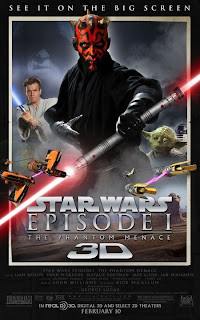 With less than a week to go, Star Wars: Episode One: The Phantom Menace at last returns. A live action SW film hasn't been seen on the silver screen since 2005. As great as the Blu-Ray box set was, nothing can quite engulf a person like going to an actual theater and sitting down in front of the opening crawl, with John Williams' music erupting from the speakers.
If anyone reading this needs any incentive to get out to the cinema, I have just the thing. One is The New Beginning, my own article recalling my experience back in 1999. The other is a brilliant piece by prequel fan Bob Clark, which can be found here. Do yourself a favor and give it a scroll through if you haven't yet. Or better still, take the time to actually print it out and read it.
And if that doesn't inspire enough, might I recommend a few books from the EU? And this isn't the ordinary EU as it's been run for awhile, this is EU with major correspondence between the authors and Lucasfilm, including Dave Filoni of Clone Wars fame and even the Maker himself.

Darth Plagueis is a treasure trove of material. It also has some special relevance for The Phantom Menace, casting some new rays of meaning on Palpatine's role in the film. James Luceno does an excellent job here, as he has in most of his other works. And best of all, if you're ever in a position where Palpatine turns to you and asks, "Have you ever heard the tragedy of Darth Plagueis the Wise?", you can just knowingly smile.

While Plagueis is rightly getting a lot of attention, The Wrath of Darth Maul by Rider Windham is an epic read, too. Again, this has some full-on collaboration between Windham and Luceno and Katie Lucas, all in a much-appreciated effort to consolidate continuity not only in the EU, but also with the films and the CW. I'm only halfway through this one and I'm told it contains some major spoilers regarding Maul's return, so consider yourself warned. I've also been assured the return is going to be done with near mythic brilliance, so I'm reading it ahead of time.
Incidentally, if anyone is around the Atlanta area, the Rebel Legion and the 501st will be setting up shop at the Mall of Georgia Regal Cinema on the afternoon of February 11th. I personally am going to try to attend this one, as it promises to be a good time. I know they're going to be doing events all over the place, so everyone should check out what the situation is going to be around their neighborhood.
I hope everyone has a great time. See ya at the movies. 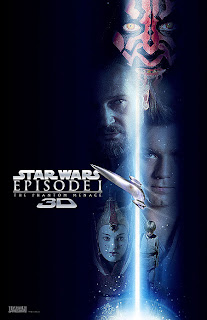 Posted by Paul F. McDonald at 5:37 PM No comments: