Rumblings in the Force ... 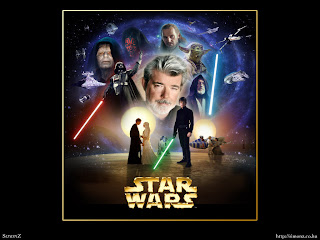 First off, I just love this picture.
Second off, check out these links to essays by friend of the Forcecast Michael Faulkner.
The Lessons of Lucasian Vision is a great exploration of what makes Lucasian cinema different from the standard issue films populating the multiplexes, and Tragedy of the Heart analyzes some of the mythic roots of Padme's unfortunate demise at the end of Revenge of the Sith.
Third off, I'm amazed (and kinda honored) that I'm still remembered on the web for the Star Wars essays and editorials I wrote many, many Iegoan moons ago. I am trying to get some of the links working for all the old Space.com stuff, though apparently most of the content has not been updated for the new site. Maybe I can re-post some of it here even though I sold it by the word.
Star Wars Scholasticism still holds an enormous pull for a lot of people, and that remains a constant source of Blakean delight for me. My very own Deconstructing Vader has been translated into French by the same gentleman who translates Brad Warner's Zen books, so let me be the first to say I hope the French enjoy it.  I'm also very pleased that Matthew Wood of Sound Design and General Grievous fame gave the thumbs up to that very same essay. I figured with the Alan Watts and Star Wars tie-in it would be hard to resist, but that at least one person at Skywalker Ranch has read an editorial of mine is very, very exciting.
I can't help but notice that I'm also quoted on the Amidala wikipedia page, which is nifty. I don't know if that makes me some kind of expert, but I'll take what I can get.
Fourth off, if you need some prequel love, there is no better place than the ever-fabulous, often-updated Star Wars Prequel Appreciation Society.  We are developing a cross-pollinating, symbiotic relationship, much in the style of the Naboo and the Gungans. I'm not sure which is which, but anyway ...
Lastly, I would also like to say that I am working on something rather big. After years of being away from the game and writing a couple of Young Adult novels (the last of which is still making the rounds), I really, really have a lot to say on that galaxy far, far away. Probably more than this blog and even the Forcecast editorials can handle. We'll see. But if you guys keep reading, I will certainly try to keep writing ...
MTFBWY
Posted by Paul F. McDonald at 4:01 PM