Lucas Stole All My Money! 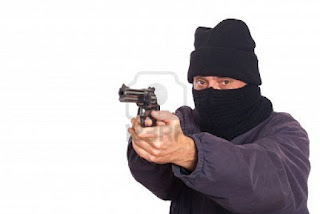 The above picture is probably one of the most popular caricatures of George Lucas on the interwebs. For countless fanboys - or possibly half a dozen of them who just post the same thing over and over again - this is the image now most heavily associated with the creator of the Star Wars saga.


At least for those that don’t involve horns and pitchforks.

As our trilogy of essays examining Lucas and fandom continues, the relationship between Lucas and money must be addressed. Perhaps first and foremost, this seems to be the topic a lot of fans are simply obsessed with. There is really no way of calculating how many fanboys on the internet and off consider themselves informed experts when it comes to Lucasfilm and the financial rewards it has reaped.

Time and again though, I’ve read countless claims that Lucas - rather than having created films and merchandise and games and comics and books that they have exchanged money for, received, and probably enjoyed – has flat-out, no bones about it, stolen money from them. I encountered a poster on Facebook during The Phantom Menace 3-D release that was insisting that Lucas had in fact stolen all of his money, and he was doing so in a very vehement and very vocal manner.

The good news is, if George Lucas is indeed darting about the shadows, complete with ski mask, gun, and a bag from the comics with one of those dollar bill signs on it to carry all his loot in, as many, many fanboys would have you believe, the solution is very simple:

Just contact the authorities. I’m sure your local police department will be happy to assist you. They’re public servants, and that’s what they’re there for. I’m positive they will be greatly entertained by your efforts to explain the situation to them. The fact of the matter is, I personally don’t know why all these people are wasting time on the internet complaining about Lucas stealing their money. They should just file a police report and be done with it, like normal people would do in such a scenario.

After all, how hard could it honestly be to identify George Lucas in a line-up? Here’s a hint. He’ll be the one wearing a flannel shirt, jeans, and a pair of Nikes.

Or could it possibly be that, deep down inside them, in places they don’t talk about parties, they actually understand they don’t have a case?  That all this is just a sense of rabid fanboy entitlement that would be laughed out of court if it ever saw the light of day? That this is just another ham-handed attempt to wrestle creative control from the Star Wars saga that they didn’t create and have no claim to, financial or otherwise?

In a delightful post titled Just Say No, I explained a lot of this:

This may come as a shock, but when you were watching these movies over and over again as children, you weren’t making future investments. You weren’t purchasing stock in Lucasfilm. No matter how much money you shelled out on Empire merchandise, it in no way, shape, or form gives you the right to dictate artistic policy thirty years later.

Again, it is a sad state of affairs when I actually have to cut and paste just basic economic facts a second time. This isn’t a barter economy. You make money, you spend money, you get something in return. In no court of law anywhere in the Western hemisphere would anyone in their right mind consider this thievery. There are quite a few Easy-to-Read books in the children’s section of your local library that can explain this to you if you need additional help. They have Big Words and Brightly Colored Pictures and everything that may be of assistance. And much like law enforcement, the friendly librarians are there to help you as well.

But not it’s not that simple in Bizarro Fanboy World, is it? Not on your life. George Lucas must be held to a completely different standard than everyone else on the planet, customs and commerce and laws and constitutions and economic systems be damned.

This argument is just too easy to make, though. Like shooting fish in a barrel. With a high-powered rifle. With a laser scope.

So okay, let’s assume the fanboys out there are right. George Lucas is simply in it for the money. He is the greediest, most soulless filmmaker on the planet. Every time he gazes through a camera, all he sees are dollar signs.

Then why did he even bother writing and directing and producing the prequels? That’s a lot of hard work, after all. Why didn’t he just turn the whole trilogy over to, oh, I don’t know, someone like ? There would have been explosions bigger than the Death Star every five minutes and all the women would have been in slave girl bikinis and everyone would have been happy. And as I mentioned in the last post, for that matter why aren’t we on Episode XXVIII: The Red Lightsaber of Doom or some such by now? After all, the whole fanboy argument rests on the assumption that there are entire armies of mindless sycophants out there ready to shell out money for anything with a Star Wars logo on it, right?

Assuming the fanboys are right again, what are the practicalities of their claims? A stupid question I know, but George Lucas is a billionaire, right? I mean, what does the man want that he can’t buy? The sky is pretty much the limit at this point, right?

If memory serves, his only extravagant indulgence after the profits from A New Hope finally began filtering in was to go out and buy a Camaro. Excessive, I know.

Unfortunately, reality is going to have to rear its ugly head again. But you know, this is The Star Wars Heresies, after all. Aside from losing a pretty penny in his divorce, most of the money Lucasfilm has earned has simply been poured back into movies. That’s how he was able to finance all the prequel films himself, that’s how he’s able to pretty much finance any movie he wants to make now, regardless of whether there’s an interested studio or not. His efforts to build up all the companies that make up Lucasfilm have been well-documented, not to mention creating the imaginative mecca that is Skywalker Ranch.

There’s also just the little fact of the amount of people involved in Star Wars who walked away millionaires. He shared countless profit points with the cast and crew, none of which he was obligated to do. And unless we all forget, when the negotiations for the merchandise and sequel rights came about back in the seventies, Lucas could very easily have renegotiated another contract asking for at least another hundred thousand dollars for writing and directing A New Hope. American Graffitti had already opened to great success, after all. But no, he opted for the merchandising rights, NOT to become a billionaire but rather to promote the film any way he could. That it left him absurdly rich was as much an accident as anything. FOX didn't blink when he asked for those rights, because they were considered utterly worthless.

And then there’s just the little thorn in the side of the fanboy argument, which is his philanthropic work. He’s even started an educational foundation which he is very passionate about sensing, quite correctly, the hopeless inadequacies of the standard, industrial-age school system.

Even long before 2010, Lucas also contributed considerably to various causes. And then in that year, he joined with other billionaires and donated half his wealth to charity. It was somewhere in the vicinity of over a billion and a half dollars. I’m sure it was a nice tax write-off, but precious few people can ever claim to have given so much to so many.

Then there’s the little matter of the man’s personal philosophy. If the fanboys would just pop in Bonus Disc 2 with the special features from the Blu-Ray set, and surf over to The Empire Strikes Back part, specifically Dagobah, they would find a featurette …. oh, wait. They didn’t buy the Blu-Ray set! They were too busy being self-congratulatory, self-styled rebels and organizing boycotts on Amazon because Ewoks blink now or some such nonsense.

Well, for those of us who have seen it, the bit in question is Lucas in the writer’s room during the prep for the Mortis episodes of The Clone Wars. Firsthand, he takes the time to describe his own personal philosophy of the Force. Allow me to paraphrase:

The core of the Force is the light side and the dark side. One is selfless
and the other is selfish. And you want to keep them in balance. What
happens when you go to the dark side is that it goes out of balance.
And then you get really selfish and you forget everybody ….
Because when you get selfish you get stuff or you want stuff.
And when you want stuff and you get stuff then you’re afraid someone
is going to take it away from you …. Once you become afraid that someone’s going to take it away from you or you’re going to
lose it, then you start to become angry. And that anger
leads to hate. And hate leads to suffering. Mostly on the part
of the person who’s selfish, because you spend all your
time afraid of losing everything you’ve got, instead of actually
living.  While joy, by giving to other people – you can’t think of
yourself and therefore there’s no pain. The pleasure factor of
greed and selfishness is a short-lived experience.

That these words can somehow be reconciled with the picture the haters and kooks try to paint of him as a money-mad lunatic, lurking in alleys with a loaded revolver, waiting for the next hapless consumer to pass so he can steal their wallet, is problematic at best.

Actually, while it wasn’t my intention, the above paragraph is a near perfect portrait of the current batch of haters on the internet parading themselves around as “fans.” They’re so afraid that they’re going to lose out on getting that original original trilogy on Blu-Ray that they get angry. And that anger leads to hate, and they go on the internet and make ridiculous claims about Lucas stealing their money. And this leads to suffering on the part of Lucas and his kids and the rest of fandom. They’re so afraid of somehow losing the original trilogy that they allegedly love so much that they can’t actually live and enjoy anything else.

As opposed to the people who have given so much back to fandom, rather than just being consumed with want they want and complaining about all the stuff that they don’t get. Or in the simple words of The Phantom Holiday: 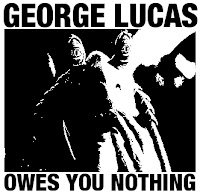